A place for archives

From Star Trek scripts to storyboards from Citizen Kane, Indiana University's film collections and related artifacts comprise one of the most comprehensive public collections in the country.

The opening of the IU Cinema in January comes amidst university-wide efforts to preserve, celebrate and share IU's vast archival film holdings with scholars, researchers and general audiences.

Among the artifacts now consolidated and preserved in museum-quality conditions are the first independently produced and directed film by an African American woman, Will, by Jessie Maple; C.B. DeMille's silent epic Chicago; material from writer-director Spike Lee; black-and-white stag films from the Kinsey Institute for Research in Sex, Gender, and Reproduction; and 1950s-era educational films that are now considered sociological treasures. 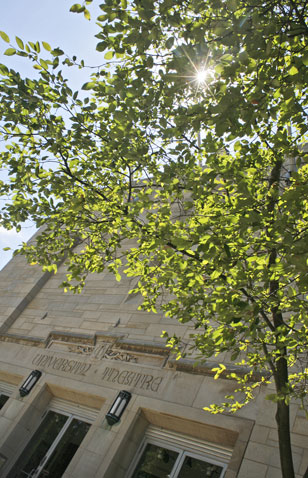 Housed in what once was known as the University Theatre, the new IU Cinema will allow the university's extensive film collections an elegant setting to be viewed, studied and appreciated.

"Access to these is key," said Jon Vickers, director of IU Cinema. "We're planning public screenings of series such as 'From the Archives' and 'Made in Indiana.' A tremendous amount of resources have been devoted to digitizing significant and fragile materials that will become accessible through a searchable database."

The combination of IU Cinema's advanced technology and the quality of the university's film-related archives is expected to elevate the prominence of these collections within academic circles and beyond.

Conference attendees will be able to view home videos or instructional films on a big screen at the new cinema, while independent filmmakers will see their works look better at IU Cinema than nearly anywhere else.

"It's astonishing to see the convergence, the synergy," said Greg Waller, chair of the Department of Communications and Culture in IU's College of Arts and Sciences. "There's the academic part, the educational part, the digitizing and archival part, the projection and exhibition part; they're all linked —and there's no question that IU can become a national leader."

The approximately 64,000 pieces of films and related archival materials are now stored in a newly constructed temperature- and humidity-controlled facility. Included in the collection are:

Most of films in the university archives are in 16mm or 8mm formats, with some 35 mm in the collection. The holdings span such formats as DVD, VHS and older and even extinct television formats. The paper collections include scripts, storyboards, promotional material, memos and other correspondences.

Rachael Stoeltje, film librarian for the Herman B Wells Library, said the library staff is working to catalog more than 30,000 items, which will be made available through a searchable database. Before this work began, librarians were receiving one or two requests for footage each week by people making documentaries or commercial films.

Waller said the renewed emphasis on accessibility raises a broad spectrum of possibilities. He is particularly fond of the educational films, which include topics ranging from Japan in the 1950s, World War II propaganda and sex education. Waller pointed out that these older films and technology are already fast friends, with snippets turning up in widely viewed YouTube videos (search YouTube for videos about "manners"). They provide an intriguing, and often humorous glance into the period in which they were made.

"This material will appeal to filmmakers, researchers, undergrads conducting research, people making documentaries for TV and others," Waller said.

"This is a time of incredible potential for preserving and enhancing Indiana University's vast archival holdings," Vickers said. "Most importantly, the IU Cinema enables us to reach across campus into our incredible archives and share these gems with a new audience."