'From the Big Bang to the World Wide Web' opens with lecture, museum exhibit

BLOOMINGTON, Ind. -- A wide-ranging project that explores cosmic, biological and human origins from the beginning of the universe 13.7 billion years ago to the present day will launch this week with an Indiana University lecture and the opening of an exhibit at IU's Mathers Museum of World Cultures.

"From the Big Bang to the World Wide Web: The Origins of Everything" is a multi-faceted public education project produced by IU anthropology professors Kathy Schick and Nick Toth, experts on the origin and evolution of human technology and co-directors of the Stone Age Institute in Bloomington. 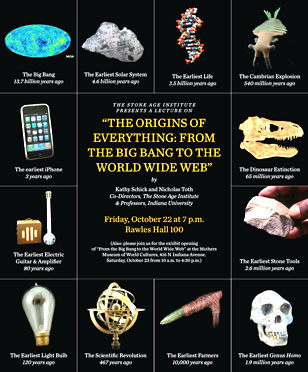 On Friday (Oct. 22), Schick and Toth will present the Leighton A. Wilkie Memorial Lecture at 7 p.m. in Rawles Hall 100 on the IU Bloomington campus. The topic will be "From the Big Bang to the World Wide Web: The Origins of Everything."

And on Saturday (Oct. 23), an exhibit of the same name will open at 10 a.m. at the Mathers Museum of World Cultures, 416 N. Indiana Ave., featuring objects and artifacts that represent highlights from human, biological and cosmological history.

Schick and Toth have been working for three years to develop the public education project, which had its genesis when, at the suggestion of IU President Michael A. McRobbie, they took a business course taught by entrepreneur Jack Gill, then an IU trustee.

Gill suggested that, given their expertise and interests, they should develop a pocket guide to major evolutionary events. Schick and Toth pursued the idea but took it further to encompass not only a pocket guide but a book, museum exhibit, live presentations, interactive website, undergraduate course, and musical compositions and performances.

Reflecting an approach called Big History, which uses multiple disciplines to examine history on a large scale across vast time frames, "From the Big Bang to the World Wide Web" revolves around the selection of the 100 most important events in the "evolution of everything."

"We're not pretending that these events are everything that matters, but they are major occurrences around which you can fit other events and better understand the context," Schick said. "Some people may quibble with the choices, and that's fine. It gets everyone thinking and talking about it."

The project divides the history of the universe into 10 times scales, each scale reducing in size by an order of 10. The first scale is from (approximately) 10 billion years ago to 1 billion years ago, the second is from 1 billion years ago to 100 million years ago, and so on. A "top 10 list" of events is included for each of the time scales, which start with "From Nothing to Everything: The Origins of the Universe, the Solar System, the Earth, and Life" and progress to "The Age of Connections: The Past Decade of Innovations and Their Implications." 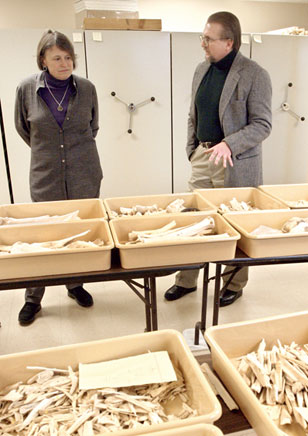 Schick and Toth serve as primary curators for the museum exhibit, which includes hundreds of objects selected to represent aspects of the 100 events -- No. 50 of which is the emergence of Homo sapiens. The Mathers exhibit hall and Museum Store are open Tuesdays through Fridays, from 9 a.m. to 4:30 p.m.; and Saturdays and Sundays, from 1 to 4:30 p.m. On Oct. 23, the day of the grand opening of the exhibit, the museum will be open from 10 a.m. to 4:30 p.m. Admission is free.

Schick and Toth searched the Internet, attended rock and fossil shows, and visited antique shops to augment their own collection of artifacts and provide materials for the exhibit. They also commissioned artisans and craftspeople to build needed items. For example, Poynter Sheet Metal in Bloomington created an exact replica of Robert Goddard's pioneering liquid-fueled rocket from the 1920s.

"For every event, we tried to find something iconic," Toth said. "It's been a lot of fun, like a scavenger hunt. If we couldn't get the original objects, we found good replicas."

The exhibit includes murals painted by Kelly Franké an IU fine-arts student, depicting major events in the history of the universe and of life on Earth. IU faculty members assisting with the exhibit come from a range of disciplines, including history and philosophy of science, history, geological sciences, physics, astronomy, biology and education.

The project also includes an original song, "From the Big Bang to the World Wide Web," with music and lyrics by Schick and Toth, who are both musicians. A recording of the song, made at Echo Park Studio in Bloomington, features local recording artist Carrie Newcomer on vocals with Toth on guitar, Schick on percussion, and Stone Age Institute and IU research scientists Sileshi Semaw on Ethiopian drum and Tom Schoenemann on drums.