BLOOMINGTON, Ind. -- When will the economic engine start? The Leading Index for Indiana (LII) has been essentially flat over the summer. September's index is marginally better, up to 96.3 from the summer's average of 96.2. 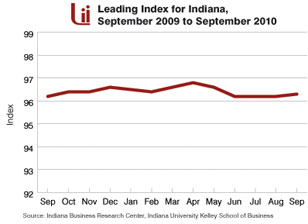 "Expectations that unemployment will remain over 9 percent for the next two years have weighed heavily on consumers," explained Timothy Slaper, director of economic analysis at the Indiana Business Research Center at Indiana University's Kelley School of Business.

"Consumer confidence remains grim, according to both the September Conference Board report and the October Thomson Reuters/University of Michigan report. With few consumers expecting conditions to improve in the near term, it is unlikely that they will start spending and add momentum to the lackluster economic recovery," Slaper added.

Corroborating the negative outlook, the Ceridian-UCLA Pulse of Commerce Index™ (PCI) fell in September for the second straight month. The decline indicates four consecutive months of limited to no increases in over the road movement of produce, raw materials, goods-in-process and finished goods since the PCI peaked in May 2010.

According to the PCI authors, these disappointing index numbers indicate that third quarter GDP growth for the U.S. will be anemic, possibly even below 1 percent.

"What will 2011 look like? Keep the bottle of Champagne on ice until 2012 or maybe 2013," Slaper projected. "There is a growing consensus among economists and forecasters that economic growth in 2011 will be weak -- less than 3 percent -- insufficient to put a serious dent in unemployment.

"The good news is that most economists do not foresee a 'double dip' recession. Perhaps we should call it a single dip of rocky road," he concluded.

Homebuilders have sensed a flicker of life in the home market. Homebuilders' confidence rose to 16 in September, up from 13 in the previous two months, according to the National Association of Home Builders/Wells Fargo Housing Market Index (HMI). This is the first improvement reported in five months. It would appear that homebuilders have looked beyond the sales lull that occurred after the home-buyer tax credit expired.

"Daunting challenges remain for homebuilders. Competition from foreclosures is well-documented, but the whirlwind surrounding the legality of many foreclosures adds even more uncertainty to an already fragile market," Slaper said. "Even if the housing market miraculously bounced back, homebuilders are uncertain that they could get credit to finance construction."

According to NAHB Chairman Bob Jones, most builders still have no access to credit. There are concerns about an ability to meet the pent-up demand when consumers are ready to get back in the market.

The Dow Jones Transportation Average (DJTA), like the rest of the stock market, rose in September, helping to provide the LII with some lift.

The Purchasing Managers Index shows that the manufacturing sectors continue to expand, but at a slower rate than last month. While the PMI reading of 54.4 percent is still positive, there are several signals that are less heartening. New orders growth continued to slow. Production is currently growing at a faster rate than new orders, but it typically lags behind new orders. As a result, production and manufacturing are expected to weaken in the fourth quarter.

The interest rate spread narrowed marginally, a trend it has followed since May. The federal funds rate remained near zero in accordance with the Federal Reserve's stated policy. The 10-year Treasury rate dipped below 3 percent in August and edged down even more to 2.65 percent in September.

"The auto sector component of the index remains in the doldrums," Slaper reported. "For unfilled orders for motor vehicles and parts, any change from strictly flat has been, disappointingly, slightly down."

On the brighter side, September auto sales were up 10.3 percent over those a year ago. Last September's sales, seasonally adjusted, were at the annual rate of 12.2 million units, a notch greater than the summer average of about 11.5 million. If October's full month numbers reflect sales from the first two weeks of the month, October sales are expected to equal September's annual rate.

Floor traffic for new vehicles has picked-up, a sign that there may be an uptick in sales in the coming months, but both pent-up demand and consumer purchase delays are also rising.