Research and insights from Indiana University

Home for the holidays -- your home, not your parents'
A Don't-Buy-This gift guide
Christmas too commercial? What's new?
The media and holiday weight gain 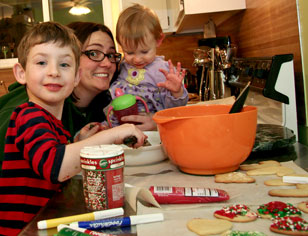 For many, the holiday season is also the roadtrip season. A family studies professor at Indiana University urges families to slam on the breaks. Instead of traveling for hours or days to spend the holiday with the grandparents, stay home and begin creating unique family traditions that let children know their family comes first. "When people are first starting to create their own family, there's still that very powerful urge to maintain very close contact with the parent, say, in the old family," said Robert Billingham, associate professor in IU's School of Health, Physical Education and Recreation. It hasn't always been like this. "This used to be unusual," Billingham said. "Parents used to raise their children to leave and to start their own families. Now, with helicopter parenting, it seems like a lot of parents are raising their children so that they don't want to leave." Billingham isn't suggesting a moratorium on family visits. He thinks it is important for the visit with the extended family to be added on to the home-based family plans. Otherwise, the kids will see their family as the add-on. "Making that transition is a sign of maturity and indicates a shift in awareness that the family that you came from needs to be second to the needs of the family that you created," Billingham said. "As much as young children really do enjoy going to the grandparents' house because they get so much attention, they also appreciate the idea that 'We are a family and we're going to create this tradition for ourselves.' If you create your own tradition and travel later, the message is that you create your own family traditions, but you don't forget the others." Billingham said more and more families struggle with this issue each year. He encourages siblings to support each other when they make this transition to stay home, and he also encourages parents to do the same with their children and their families. 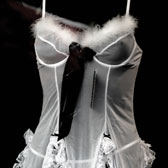 What was he thinking? A Don't-Buy-This gift guide. Sometimes knowing what NOT to get someone can be just as important as the gift that's ultimately given. Indiana University experts in romance, disability and accessibility, fashion, fitness and aging offer advice that could turn a problem or awkward gift into a winner.

Gifts to keep the flame alive. "The holidays and New Year can be a nice time to focus on one's relationship, to be thankful for what a couple has and to start over anew," said Debby Herbenick, associate director of Indiana University's Center for Sexual Health Promotion and author of Because It Feels Good: A Woman's Guide to Sexual Pleasure and Satisfaction. However, people often shy away from giving sex-themed gifts, such as lingerie, books or toys, to their significant other. "They may worry whether such a gift is 'appropriate' or too self-serving."

A few DOs of lingerie and sex toy shopping:

Yes to technology but skip the bells and whistles. Some -- but not all -- older adults are behind the times when it comes to technology so technology gifts need some special consideration. "Sometimes what we see as a means of supporting or encouraging improvement might appear threatening to an older loved one," said Lesa Lorenzen Huber, an aging and technology expert in the School of HPER. Huber said, for example, that someone might want to give their loved one an electronic cognitive game because they read that it can help prevent Alzheimer's Disease, but the gift receiver might actually be afraid to play it out of fear that her memory is slipping more than she thought. "We tend to have a perceived notion of usefulness," Huber said. "Find out what they are interested in and don't just think about what you think they need."

Huber and Sherill York, executive director of the National Center on Accessibility at the School of HPER, offered these suggestions:

Another tie -- just what they didn't need? Shopping for a fashionable gift need not be so difficult especially when accessories such as handbags, scarves and standout jewelry are trendy this season, said Margaret Fette, a visiting lecturer in IU's Department of Apparel Merchandising and Interior Design. The key is to pay attention to the gift recipient's style and fashion interests, Fette said. She suggests going window-shopping with your gift recipient. "Basically, step into their world," Fette said. "When somebody pays attention to you and puts an effort into buying a gift, the receiver will be a lot more touched by that than by a gift card."

Fette said fashion doesn't need to be expensive. She suggests shopping at local, small boutiques. "They are struggling financially and have frequent sales with unique selections and reasonable prices," Fette said. "Plus, you'll be supporting your community." Fette also suggests going to retail stores such as T.J. Maxx, Marshalls and Kohl's to get deals on designer duds.

You think I'm fat?! Not sure you should give your niece that Pilates video? Then don't, said Andy Fry, assistant director of Fitness/Wellness at Indiana University. Fry said a person's interest must be involved in purchasing any gift, especially a fitness gift. "Make sure your gift is not going to offend someone," Fry warns. Chris Meno, an IU Health Center psychologist and member of the Coalition for Overcoming Problem Eating/Exercise (C.O.P.E), suggests avoiding fitness gifts altogether. "The receiver might read into the meaning of the present," Meno said. "They might think to themselves, 'Why would they give me this gift?' and conclude that you think they need to change their appearance. This could lead a person to begin feeling self-conscious or negatively about his/her body, and possibly even to start using unhealthy methods to quickly change his/her appearance and thus relieve the self-consciousness. Overall, I think giving a fitness gift can be more damaging to give than not to give."

But Fry said if someone wants a change, there are some fitness gifts that could be beneficial to the receiver. He offers these suggestions:

Purchase a useful technology present that will outlast any fad. During the holiday season almost everyone wants to receive a new form of technology. From iPhones to iPads, there is probably some form of technology on someone's holiday wish list. And the holiday wish lists for friends and family members with disabilities are no different -- with the exception of some adaptive features to consider during the gift purchase. "People with disabilities are just as interested in current technology," said Sherril York, executive director of the National Center on Accessibility in the School of HPER. "Technology is actually a great equalizer." For example, deaf youth are able to communicate through text messaging, which puts them on the same playing field as everyone else, York said. Buying adaptive technology does not have to be tricky -- in fact, many everyday items include adaptive features, but are not called "adaptive technology." A lot of adaptive equipment is relatively inexpensive and can be purchased at a local Radio Shack or Lowe's. "Assistive technology is at a store near you, it's just not called that," York said.

York offers these suggestions while shopping for the perfect technology present for an aging family member or friend with a disability:

More gift ideas for friends or family members with disabilities:

The meaning behind Christmas is more secular than you think. No one -- even non-Christians -- can escape the commercialism of Christmas. "I think that people get too upset about the commercialism of Christmas as a holiday because it was never entirely religious in origin," said Peter Thuesen, department chair and professor of religious studies at Indiana University-Purdue University Indianapolis. "No one knows exactly when Jesus was born. No one knows exactly how Dec. 25 evolved as the birth date of Christ." Christmas succeeded the pagan celebrations of the Winter Solstice and Saturnalia, a festival created to honor the god Saturn. Christmas as a celebration came to replace these pagan festivals. In early America, the Puritans did not celebrate Christmas because they thought it was a pagan holiday, Thuesen said. Christmas is both religious and secular -- and Thuesen said the two are not sharply distinct. "Many people who are not religious celebrate Christmas," Thuesen said. "They see it as a wintertime holiday to get together with family." But with so much commercialism surrounding Christmas, other holidays such as Hanukkah, Eid, and Kwanza tend to be forgotten. "The U.S. is the most diverse society on earth and thanks to immigration, virtually every culture is represented in some form," Thuesen said. So what should you put on holiday greeting cards? Merry Christmas? Happy Hanukah? Happy Holidays? "'Happy Holidays' is always safe," Thuesen said. "Merry Christmas doesn't work in multicultural settings because not everyone is Christian. To say 'Happy Holidays' is simply a way of showing multicultural sensitivity. I don't think the use of a generic phrase like this detracts in any way from the religious meaning of Christmas or any other holiday." Thuesen said he thought that opposition to "Happy Holidays" as too politically correct might diminish if people knew more about the traditions of other religions.

Gain the holiday weight without the self-disdain. Holiday weight gain is real, but so is the media's obsession with it. "Not everything you read or hear is good or bad," said Andy Fry, assistant director of Fitness/Wellness at the School of HPER. Fry said to remember that it takes the consumption of 3,500 extra calories in one week -- the equivalent of 500 extra calories a day -- to gain one pound in a week. A piece of pecan pie or a cup of green bean casserole or two mixed drinks amount to around 500 calories. Walking for a mile burns 100 calories.

Need some perspective on holiday weight gain? Here are some more tips from Fry as well as members of the Coalition for Overcoming Problem Eating/Exercise (C.O.P.E), psychologist Chris Meno and Megan Duracka, a predoctoral psychology intern at IU's Counseling and Psychological Services (CAPS), a division of the IU Health Center.

For additional assistance with these tips, contact Tracy James, University Communications, at 812-855-0084 or traljame@indiana.edu.