Cyndi Connelley-Eskine
Office of the Vice Provost for Faculty and Academic Affairs
vpfaa@indiana.edu
812-855-9973

Téllez, Pryor and de Souza to be honored at IU Sonneborn Lecture and Provost Professors event

BLOOMINGTON, Ind. -- Carmen Helena Téllez, professor in the Jacobs School of Music and the 2010 recipient of the prestigious Tracy M. Sonneborn Award at Indiana University, will be recognized on Nov. 4 in the IU Simon Music Center's Auer Hall, where she will present the Sonneborn Lecture.

Téllez's talk, "The New Conductor," will begin shortly after the 4 p.m. awards ceremony. The lecture and a reception afterward are free and open to the public.

Téllez's lecture will discuss how in recent times, there have been countless articles, blogs and even books on the demise of classical music.

"They represent a concerned reaction to recent cultural developments, such as the decline of music education, the financial struggles of orchestras everywhere, and the upsurge of popular music and other media, which dominate the attention of the press and the listener to whom classical music is intended," she wrote in a description of her lecture. "These developments must be addressed by the conductor, who stands in a point of engagement between the composers (living and historical), the music-making ensembles, the community and the media."

Is classical music in danger? Are the definition and the purpose of this art misunderstood? Is it perhaps the "business model" or a "paradigm" that is changing?

"Today's conductor must examine the social trends and respond with creativity to new vehicles and languages through which art music can be expressed, including, perhaps, the styles and media that appear to oppose it," she wrote. "Fascinating developments are taking place in the field. Conductors have changed through history and they will change again now."

Téllez is the director of Graduate Choral Studies and the Latin American Music Center and artistic director for the Contemporary Vocal Ensemble. She was selected as the Sonneborn recipient due to superb creative artistry and innovation in forging new connections between music performance, conducting, composition, teaching and scholarship.

She has been referred to by her peers as a "brilliant visionary" whose work as a conductor, scholar and interdisciplinary artist reflects a "forward-looking perspective in her performances, teaching, leadership and goals for the art she produces," said Jan Harrington, Chancellor's Professor emeritus of music at the Jacobs School of Music.

Composer-in residence Cary Boyce, of the Aguavá New Music Studio of which Téllez is co-founder and music director, said that in today's "age of fast communications, shifting artistic paradigms, evolving media and changing business models," Téllez's approach to music and her expertise embrace and capitalize on this global change. Her innovative leadership of the IU Latin American Music Center and the Latin American Popular Music Ensemble has made them a beacon of Latin American music.

"Her history of performance is not only local to the IU campus and the Bloomington community, but reaches to the most important cultural centers in North and South America, Europe and Asia," said David Villanueva, administrative director of the Department of Choral Conducting of the Jacobs School of Music. "She has blazed significant trails in performance practice, which have been emulated by others and are now the standard for contemporary music programming."

Téllez has been instrumental in numerous world premier performances at IU and through her entrepreneurial work. A sampling of her work includes the performances of the complete version of Ani Ma'amin by Chicago composer and Pulitzer winner Shulamit Ran; Unicamente la verdad / Only the Truth, a video-opera by Mexican composer Gabriela Ortiz; Music for Rollins Chapel, a site-specific work by American composer Eric Richards with Aguavá New Music Studio; Sadako for chorus, soloists and ensemble by Kevin James; and Sun-Dogs, a co-commissioned new work by Scottish composer James MacMillan. She has sought to involve students with parallel interests in new music and new forms of presentation in all her projects.

Pryor also is a professor in the Atmospheric Science Program in the Department of Geography and the Center for Research in Environmental Sciences. Her research focuses on two major areas: physical climatology, specifically climate change and variability, and impacts on the energy and agricultural sectors; and atmospheric chemistry and biogeochemical cycling with the atmosphere-surface exchange of reactive gases and particles. In addition to her position at IU, she is a visiting distinguished professor at the Atmospheric Environment Institute at the University of Aarhus in Denmark, and a visiting senior scientist with the Department of Wind Energy and Atmospheric Physics at the Risø National Renewable Energy Laboratory in Denmark.

Current projects involve the study of particle nucleation events in the Ohio River Valley; development of 21st century precipitation scenarios using probabilistic downscaling techniques; and the development and evaluation of downscaling techniques for near-surface wind climates. Her work is funded with support from the National Science Foundation, the Department of Energy, Nordic Energy Research and the European Union, among others.

Professor Scott Robeson, chair of the Department of Geography, states that Pryor "is an extraordinary professor who is among the most productive research scientists ... She maintains the highest level of commitment to instruction, mentoring and service. She devotes an enormous amount of time, energy and vitality to her instruction and mentoring while being a productive and successful scholar." 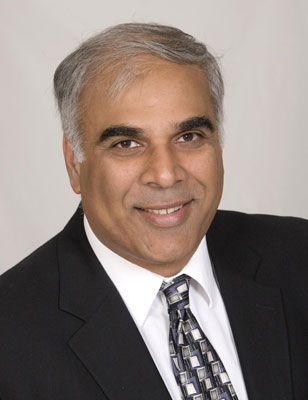 He is a prolific instrument builder who has developed cutting-edge detector arrays. As remarked by James Reilly, chair of the IU Department of Chemistry. "He (de Souza) is known for not only developing some of the best detectors in this field but for then bringing them to bear on the most relevant questions. The detectors he has built have also had a significant impact on the research pursued by other groups and continue to enable new research directions."

De Souza's passion and effectiveness in teaching have been honored by designating him as a recipient of the IU Trustees' Teaching Award and the President's Award, as well as an SBC/Ameritech Fellow. These awards are reflective of his strong advocacy of the value of education and recognize in part his innovative creation of a Web-based learning environment tool called Computer Assisted Learning Module or CALM (https://calm.indiana.edu/) in 1996. This tool utilizes a Socratic approach to teach students by algorithmically generating and presenting individualized chemistry questions to students. CALM has been used by IU Bloomington freshmen chemistry students so successfully that its use has been expanded to high school students. The positive impact of this teaching aid has been experienced by 148 teachers in 210 schools across 17 different states.

About the Sonneborn and Provost Professors awards

The Sonneborn award was established in 1985 by the Dean of the Faculties office to honor an IU professor who has achieved distinction as a teacher and as a scholar or artist. The award is named for the late Tracy M. Sonneborn, an IU biologist who distinguished himself in both teaching and research. Sonneborn came to Indiana University in 1939 and became internationally known for his biological studies specializing in genetics. He was one of three leading geneticists in the country at the time. Sonneborn was a member of the National Academy of Sciences, the American Academy of the Arts and Sciences and the American Philosophical Society, and was one of the first three Indiana University faculty members to be granted the title Distinguished Professor.

The Provost Professorship recognizes faculty who have achieved local, national and international distinction in both teaching and research. The awards have been known since their creation in 1995 as Chancellor's Professors. The change in name reflects an administrative reorganization on the Bloomington campus in 2008. These awards are supported by the generosity of IU Alumni, and over the years only 35 faculty members have earned the title.

For more information about the lecture or the awards, contact Cyndi Connelley-Eskine, Office of the Vice Provost for Faculty and Academic Affairs, at cyconnel@indiana.edu or 812-855-9973. For an application for the Provost Professors or Tracy M. Sonneborn awards, see https://www.indiana.edu/~vpfaa/awards/sonneborn.shtml.