It's lunchtime on Kirkwood Avenue in Bloomington.

At the Village Deli -- among plates piled high with sandwiches and fries, plastic cups of iced tea and the warm buzz of midday meal conversation -- is a gradually assembling group of women who arrive with smiles in their eyes and notebooks in their hands. 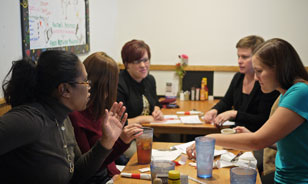 One by one, the charter members of Indiana University's Working Moms Group gather at two long tables under a chalk board listing the daily specials to discuss the mission statement and direction of the new organization, which formed in May 2010.

But before business, more practical matters are at hand: Amanda Peterson, an academic advisor at the IU School of Public and Environmental Affairs, pulls out a wad of diaper coupons held together neatly with a paper clip. "Can anyone use these?" she asks. "We use the generic diapers -- they always work the best for us."

The coupons prompt a conversation on money-saving tips that threads through the entire lunch meeting -- even becoming the theme for the group's first workshop -- in between conversations about programming ideas, WonderLab, grocery shopping, Starbucks, a new rap by Will Smith's daughter and finally, how to make the group equally accessible to faculty and staff.

Andi Gitelson, an academic advisor at the College of Arts and Sciences, said she was inspired to create the group after attending a panel discussion on work-family life balance presented by the Office for Women's Affairs.

"After benefiting from the conversations that took place there -- and seeing the number of working moms who attended -- I suggested to the Office for Women's Affairs that a working moms group be formed for IU faculty and staff," Gitelson said. "All of the local mom groups and events I had researched were more for moms at home, or part-time working moms. I felt that a group on campus could be an outlet for the professional and personal growth of the working moms at IU."

Gitelson e-mailed the other IU working moms she knew and invited them to lunch in the spring, asking them to invite friends. Monthly lunches have followed -- as have new friendships, play dates in the park and even a baby shower.

"I'm excited to have us become a little more formalized because I think we could be an amazing resource for our colleagues on campus, who are probably crunched for time outside of work but are in need of educational, professional and social interactions that they can truly relate to as moms," she said. Thus far, the group's dozen or so active members are staff members, but Gitelson wants to include faculty members as well.

At the Village Deli meeting, Katrina Reynolds, assistant dean and director of Student and Staff Advocacy for the Office for Women's Affairs, suggested hosting a tea event on a Sunday afternoon in the fall that focuses on saving money.

"We did a women's tea where I worked in Chicago," said Theresa Hitchcock, an academic advisor at IU (who, in the course of conversation, emerged as the group's money-saving expert and coupon queen). "We had the women bring a dessert to represent their culture, and it was so much fun. People brought recipes, and we had enough recipes to make a booklet."

"The coupon workshop can be our first event, before Thanksgiving," Reynolds said.

"If we do it before 'Black Friday,' I can show you how to shop in preparation for Thanksgiving," Hitchcock said. "Maybe Monday of that week -- I think the sales start on Wednesday before Thanksgiving."

"I want my husband to come," Reynolds said. "He has taken it upon himself to do the grocery shopping -- and he doesn't look out for the sales."

"I do so much bargain shopping, I know the prices of everything," Hitchcock said. "We could do a 'Price is Right' game at the tea where people have to guess the price of the product."

Gitelson smiled. "I'm putting you on speed-dial," she told Hitchcock.