WHAT: Hay Fever, by Noël Coward, directed by Murray McGibbon.
WHEN: Opens Friday, Nov. 12 at 7:30 p.m. Additional performances run Nov. 13, Nov. 16-20 at 7:30 p.m. with a matinee performance on Saturday, Nov. 20, at 2 p.m.
WHERE: All performances take place at the Ruth N. Halls Theatre, Lee Norvelle Theatre & Drama Center at 275 N. Jordan Ave. No photography or recording of any kind is permitted during performances. This production contains smoking.
TICKETS: Regular admission is $22 for adults, $15 for students, $16 for senior citizens; Student Rush Tickets: $10 with cash and a valid IU Bloomington student ID on the day of each performance. 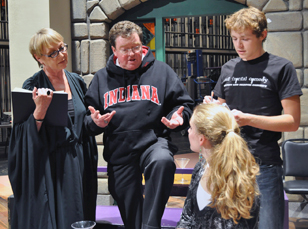 Noël Coward has said, "Wit ought to be a glorious treat like caviar; never spread it about like marmalade." He handles this treat brilliantly in his 1924 play Hay Fever. This classical comedy is Coward's cross between farce and comedy of (bad) manners, set in the English country house of an eccentric family, each of whom invites a guest down for the weekend. The family's self-centered and rude behavior results in a farcical sequence of altered relationships between hosts and guests until the guests flee in desperation.

This production is directed by award-winning IU Theatre Associate Professor of Acting and Directing Murray McGibbon. He describes his approach to Hay Fever as a "Bubbling froth of fresh fun!" As a life-long Coward fan, McGibbon is delighted to work on a period British-style piece that is sheer entertainment.

"Coward's talent is to amuse, and that's what we're setting out to do," he said, "to give an audience a jolly good laugh by providing them with an enchanting and entertaining evening at the theatre."

The IU Department of Theatre and Drama is proud to present the American debut of renowned British theatre actress Sandra Duncan. Her appearance on the IU stage is a rare experience in which an international star shares the stage, and her talent, with students. She comes to IU after closing her critically lauded performance of Sybil Birling in J.B. Priestley's An Inspector Calls at the Wyndham's Theatre in London's West End, directed by Stephen Daldry. She spent 19 years of her career in South Africa, where she received 15 best actress awards. It was also there that she first met McGibbon when he directed her in the role of Gertrude in Hamlet. 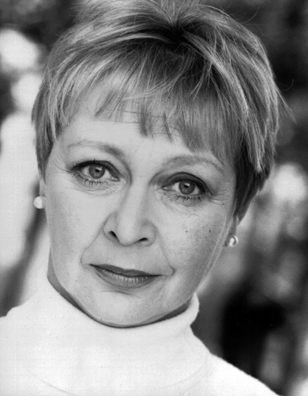 Duncan is excited to be a part of the IU production. No stranger to her role, she's portrayed Judith Bliss before at the Pitlochry Festival Theatre in Scotland.

"It's like a familiar piece of music being played by different instruments," she said of coming back to Coward's work at IU.

The students are likewise thrilled for the opportunity to work with a professional actress from overseas.

"Working with Sandra Duncan has been a riveting and electrifying experience," said theatre major Brianna McClellan. "She is so inspirational and motivating, and it has truly been a pleasure working with such an amazingly talented lady."

Joining Duncan in her American stage debut is third-year M.F.A. acting student Henry A. McDaniel III (Take Me Out, Parentheses of Blood), as well as second-year M.F.A. acting students Kristl Densley (Major Barbara, As You Like It), and Molly Casey (Marat/Sade, The Clean House). Returning to the Norvelle stage as members of the cast are undergraduates McClellan (A Little Night Music, Blood Brothers) and Tyrone Van Tatenhove (As You Like It, The Tempest). Making their Norvelle Center debuts are undergraduates Courtney Lucien, Thomas Beaver, and theatre M.A. student Clayton Gerrard.

To see information about the entire cast and production team, and the rest of the 2010-2011 season of award-winning plays visit theatre.indiana.edu.

Interview requests should be directed to John Kinzer at 812-855-0514 or jkinzer@indiana.edu.