BLOOMINGTON, Ind. -- A former Indiana University professor who is now senior vice president and director of research at the Federal Reserve Bank of St. Louis will give a presentation about the effect of economic activity in the European Union on Indiana trade and business activities. 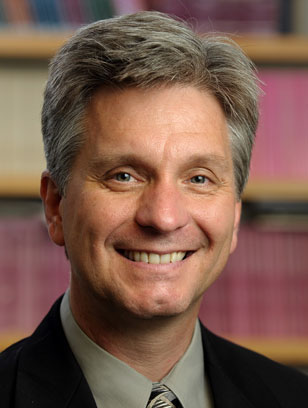 Christopher J. Waller, also the Gilbert Schaefer Chair of Economics at the University of Notre Dame, will speak at noon on Thursday, Nov. 18 at the Hilton Indianapolis Hotel & Suites at 120 W. Market St., in Indianapolis. The title of his presentation will be, "The euro and Its Effects on the Midwest."

The euro, one of the largest fiscal experiments in history, has global financial markets worried about its future. Waller, who has written extensively about European monetary affairs, will discuss how the Midwest's economy is influenced by and invested in the euro.

The European Union Center at IU Bloomington is hosting the event. The public is invited. Registration costs $25 and lunch will be provided. For more information or to register, visit www.indiana.edu/~eucenter or contact Brant Beyer at 812-856-3238 or bbeyer@indiana.edu.

"We've got the same kinds of issues as the EU in the United States and at state levels too," said Gardner, a frequent research collaborator with Waller. "There are deficits everywhere and, if they aren't addressed, all of the states' (economies) will look like Greece, which is on the verge of default.

"There are lessons to be learned and the Europeans are doing an impressive job in addressing their fiscal issues," he added.

At the St. Louis Fed, he oversees the research department and advises the bank president on policy. He also participates in the Federal Open Market Committee meetings in Washington, D.C., which determine monetary policy regarding interest rates.

An expert on monetary theory, dollarization and the political economy of central banking, he also has served as a visiting scholar at the Federal Reserve Banks of St. Louis and Cleveland, Federal Reserve Board of Governors, Central Intelligence Agency, and the Economics Education and Research Consortium.

His research has been published in top economic journals, including American Economic Review, the Journal of Monetary Economics and the Quarterly Journal of Economics.

This event also is co-sponsored by the IU School of Public and Environmental Affairs and the IU Bloomington Department of Economics.