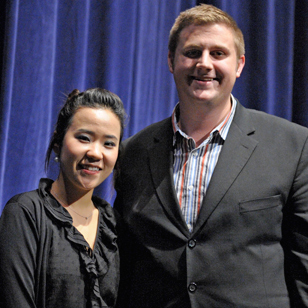 The two winners are soprano Hye Jung Lee, a Jacobs student pursuing an artist's diploma in voice and studying with Costanza Cuccaro, and Michael Brandenburg, tenor, a Ball State master's student of Joseph Levitt. They will advance to the Central Regional Auditions Nov. 7 at the Music Institute of Chicago in Evanston, Ill. The winners of that round will compete in the National Semi-Finals March 6 at the Metropolitan Opera in New York. The Grand Finals Concert will take place at the Met March 13.

Total prize money awarded in the Indiana District was $3,000.

Judges for this year's competition were Gayletha Nichols, executive director of the Metropolitan Opera National Council Auditions; Dorothy Randall, a coach, accompanist, and chorus master from San Antonio; and Joshua Winograde, artistic administrator of Los Angeles Opera and the director of the Domingo-Thornton Young Artist Program.