Editors: For a Spanish version of this release, visit https://newsinfo.iu.edu/news/page/normal/16394.html.

BLOOMINGTON, Ind. -- Charles Beeker, director of the Office of Underwater Science in Indiana University's School of Health, Physical Education and Recreation (HPER), has been honored by the National Academy of Sciences for the Republic of Armenia (NASRA) for his archaeological work with the Armenian-owned 1699 Quedagh Merchant, Captain Kidd's shipwreck discovered in the Dominican Republic. 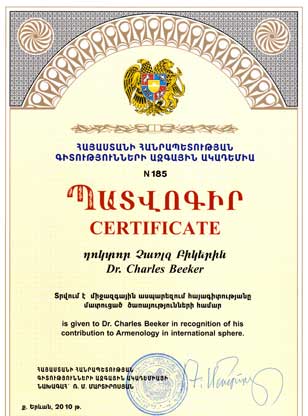 Charles Beeker was honored by the National Academy of Sciences of the Republic of Armenia.

After traveling to Yerevan, Armenia, to discuss his research, Beeker received a certificate from NASRA President Radik Martirosyan, who acknowledged Beeker's research endeavors on the archival and archaeological significance of the Quedagh Merchant, and specifically referenced his contributions to Armenology in an international sphere.

Beeker's address was attended by more than 100 scholars and members of the academy and later that same day he gave a keynote presentation at the American University of Armenia. The following day, he was honored during a reception hosted by the British Embassy and attended by representatives of the U.S. and India.

"This is an honor that truly raises the international significance of this discovery," Beeker said. "To have an Indian-built ship, owned by Armenian merchants, traveling from India to ultimately sink in the Dominican Republic, a ship that was captured by a Scottish privateer (Captain William Kidd), and discovered by Marine Protected Area specialists at Indiana University . . . it's an opportunity that very few other projects can boast."

Charles Beeker at the site of Captain Kidd's shipwreck

Armenia is a country that is landlocked, sharing borders with Iran, Georgia, Turkey and Azurbijan. With no sea trade or ships to speak of, the research and documentation of 17th century Armenian maritime trade by IU researchers is significant in preserving this piece of history. Armenians of the 15th through 17th centuries were noted international traders, and Beeker's presentations described how the Quedagh Merchant represents this aspect of their national identity.

Indiana University research on the Quedagh Merchant is funded in part by the United States Agency for International Development, under the Living Museums in the Sea project, which will establish the Captain Kidd shipwreck as an Underwater Preserve, protecting the archaeological and associated biological resources as a sustainable tourism destination.

Indiana University's School of HPER encompasses a broad spectrum of academic interests and professional fields. The Office of Underwater Science offers undergraduate and graduate students the opportunity to become involved in meaningful, multidisciplinary research projects involving underwater resource protection. It is one of the oldest and largest academic diving programs in the U.S. The School of HPER offers nearly 50 undergraduate and advanced degree programs through its departments of Environmental Health, Applied Health Science, Kinesiology, and Recreation, Park and Tourism Studies. To further its health and wellness initiative, Campus Recreational Sports provides sport and fitness services for the IU community and the public. More information can be found at www.hper.indiana.edu.