A limited number of seats are still available for the Nov. 10 Pre-Opening Press Day at the new, state-of-the-art Indiana University Cinema.

Scheduled events include a personal tour of the new facility — possibly the best-equipped university cinema in the United States — and an exclusive screening of the newly restored The Bridge on the River Kwai on IU Cinema's 4K digital projection system. 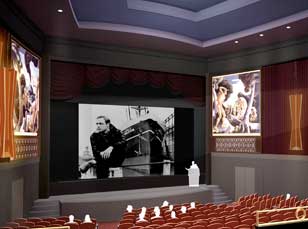 An architect's rendering of the IU Cinema Screening Room

Join IU Cinema director Jon Vickers and Grover Crisp, senior vice president of asset management, film restoration and digital mastering at Sony Entertainment, as they discuss the mission of IU Cinema, its technological capabilities and the art of digital restoration.

Then see David Lean's classic The Bridge on the River Kwai as you've never seen it before. Newly restored from the original negatives, this film can be seen for the first time in the same 2:55:1 aspect ratio in which it was shot — the closest approximation of the director's original vision ever available to the public.

One of about 10 THX® Certified university cinemas in the country, IU Cinema is destined to become the leading center for the scholarly study of film in the Midwest.

2:30 p.m. — Screening of The Bridge on the River Kwai (1957), newly restored to 4K digital presentation from the original negatives, which has returned the film to its original 2:55:1 aspect ratio