Ceremony with U.S. ambassador comes just before President Obama's trip to the country 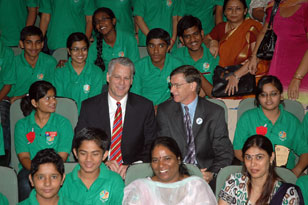 U.S. Ambassador Tim Roemer, left, and Terry Mason with a group of students in India.

Project Citizen is a school program in which students examine public policy issues in their communities. It is part of the larger Civitas International Education Exchange Program funded by the U.S. Department of Education and administered by the Center for Civic Education. The goal of Civitas is to pair educators from Eastern Europe, the former Soviet Union, Africa, Asia and Latin America with their counterparts from 28 U.S. states to promote civic education. The IU School of Education became involved with the very first exchanges in 1995.

Mason said civic education is tremendously important for India, seen as a strategic and relatively stable country in the region, a point emphasized by President Obama's speech on democracy yesterday. "Everyone's watching India and we know it is emerging as a world economy, but people are also watching to see what kind of a democracy it's going to be," Mason said. "I think civic education, the way we're working on it there, could have a powerful impact on that kind of political stability."

The exchange with India began in 2008, also involving educators from Malawi. Last year a delegation from India and Malawi spent several days in the United States, stopping in Washington, D.C., for meetings at congressional offices and the U.S. Department of Education, then attending a conference on civic education and holding individual meetings at IU Bloomington. Mason and Rob Helfenbein, associate professor of teacher education at the IU School of Education in Indianapolis, first traveled to the countries in December 2008.

As the partnership has grown, Mason said he and his colleagues have continuously expanded the program's reach, both in terms of content and geography. The October workshops were conducted both in Delhi and the southern state of Kerala, more than 1,500 miles apart in the large country. "We regularly identify either new curriculum programs that we want to start or ones that we want to consolidate by training new groups of teachers or conducting 'training of trainers' workshops," Mason said. "It's always a question of expanding what we've already done and then finding ways to initiate new projects."

The showcase attended by the U.S. ambassador was a celebration of some of the best work students have produced from the program which includes thousands of Indian students. Twenty-five schools sent students to the program to display their work dealing with some of the most important public issues facing India's population.

"Students identify problems in their communities and look at what public policies influence those problems. They then try to come up with solutions and make recommendations for policy changes," Mason said. He added that Roemer spent considerable time visiting with the students to learn much more about their work, and he had a tremendous rapport with them as they responded to him enthusiastically,

Mason said the huge country with more than a billion inhabitants faces enormous challenges but the program is a demonstration of India's potential. "In my visits there I have been struck with the forward-looking attitude of the teachers and students I have encountered and have been impressed with their abiding optimism about India's future," he said. "It is evident that the citizens of India are not only embracing India's role as an economic power in the world but also its responsibility in the quest for democracy in their region. As I pointed out to those attending the showcase, the students participating in Project Citizen will use the knowledge and skills they have gained to lead this effort and contribute significantly to India's growth as a modern nation."