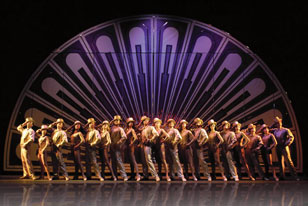 Seventeen Broadway hopefuls seek parts in the chorus of an upcoming Broadway production. All have made the first cut, but the second part of the audition is something none of the performers expects: the director asks each hopeful to come forward and talk about who they are inside. Throughout the show, the audience learns the story of each dancer's struggles, triumphs and everything in between. In the end, only eight make it to the chorus, but the story of how they got there will be remembered.

The original production of A Chorus Line opened at the Public Theater's Newman Theatre on May 21, 1975 and transferred to Broadway's Shubert Theatre later that year.

It won the Pulitzer Prize for Drama, nine Tony Awards (including Best Musical, Score and Book) and the New York Drama Critics Circle Award. It ran for nearly 15 years, closing on April 28, 1990 after 6,137 performances. A Chorus Line remains the longest running American musical in Broadway history. The book was written by James Kirkwood, Jr. and Nicholas Dante, with music composed by Marvin Hamlisch and lyrics by Edward Kleban. The original production was directed and choreographed by Michael Bennett.

"A Chorus Line has inspired audiences for decades. We are thrilled to have the opportunity to bring back this fresh new Broadway production to our stage -- and just as excited to welcome back a few of our own successful IU alumni," said Doug Booher, director of IU Auditorium.

In keeping with the theme of artistic dreams and successes, four members of the pit orchestra are graduates of IU Jacobs School of Music. Trevor Davis (MM,'08), Eric Dickson (MM, '05), Sean Imboden (BM, '06), and Chris Imhoff (MM, '08), make up almost half the pit orchestra in this critically acclaimed Broadway musical that will be making its way across the country over the next eight months. Biographical information on these students can be found at blogs.music.indiana.edu/brass.

In addition, cast member Ashley Klinger previously studied with Michael Vernon, Jacobs School Department of Ballet chair, in Cuyahoga Falls, Ohio. Klinger and Vernon will have the opportunity to work together again during a special master class given by cast members to teach IU ballet dancers the iconic opening number from the show.

IU Auditorium is also creating opportunities to connect the campus and community with this iconic musical. There will be a "Best Kick or Best Drum Lick" contest Nov. 9 at 2 p.m. on the front steps of the auditorium, giving passersby the chance to win tickets to A Chorus Line or DRUMLine Live! (at IU Auditorium Saturday, Nov. 13, 7:30 p.m.). Also, Facebook fans and Twitter followers will have the opportunity to find hidden tickets around campus or even win a backstage tour.

For more information on A Chorus Line and all 2010-2011 season shows at IU Auditorium visit IUauditorium.com. The website features video clips and a selection of songs from this season's performances, in addition to a direct link to the IU Auditorium Facebook Fan Page and Twitter page, whose members receive exclusive benefits throughout the year.