INDIANAPOLIS -- Researchers report that a drug commonly used to treat diabetes may also retard the growth of fluid-filled cysts of the most common genetic disorder, polycystic kidney disease. PKD does not discriminate by gender or race and affects one in 1,000 adults worldwide.

Researchers from the schools of Science and Medicine at Indiana University-Purdue University Indianapolis and colleagues from the Mayo Clinic report this month in the online peer-reviewed journal PPAR Research that pioglitazone appears to control the growth of PKD cysts. 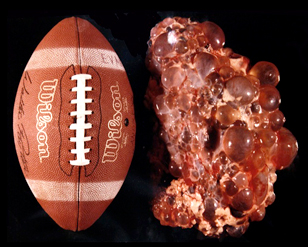 At left, a regulation size football. At right, a human cystic kidney removed during a transplantation operation. A normal human kidney is the size of an adult fist.

Using a rat model that has the same genetic mutation as a form of human PKD, the two research groups independently tested a pioglitazone treatment regimen and found that it slowed down both kidney and liver cyst growth by inhibiting a chloride channel in the cells of these organs.

Normally pioglitazone works by making the body more sensitive to its own insulin. However, in studying why this class of drugs causes fluid retention, Bonnie L. Blazer-Yost, professor of biology at the IUPUI School of Science and corresponding author of the new study, serendipitously found that it also inhibits a chloride channel.

"We thought that since this class of drugs inhibits the body's chloride channels, then it would be a good candidate to treat PKD, a disease in which excessive chloride and water are transported into the cysts of the kidneys and the liver causing them to expand," said Blazer-Yost.

"The idea of using a chloride channel inhibitor to treat PKD is not new. What is new is our finding that an insulin sensitizing agent like piogltiazone inhibits chloride channels. The finding that pioglitazone, which has already been approved by the Food and Drug Administration for diabetes, can halt cyst progression and may be an effective and well-tolerated treatment for this chronic disease, is exciting. Confirmation of these results in other animal models of PKD would be a useful next step.

"We know from long-term experience that this drug has a good safety profile. Strategies that minimize adverse events are important when considering treatments for a chronic disease such as PKD," said Blazer-Yost, a physiologist who hopes that human trials of pioglitazone therapy for PKD can be conducted in the near future.

In addition to Blazer-Yost, who is also an adjunct professor of cellular and integrative physiology and of anatomy and cell biology at the IU School of Medicine, authors of "Pioglitazone Attenuates Cystic Burden in the PCK Rodent Model of Polycystic Kidney Disease" are Julie Haydon of IUPUI's School of Science; Tracy Eggleston-Gulyas, Dr. Jey-Hsin Chen and Vincent Gattone of the IU School of Medicine; Xiaofang Wang and Dr. Vicente E. Torres of the Mayo Clinic.

The studies at IUPUI were funded by an IUPUI Research Support Fund grant. The studies at the Mayo Clinic were supported by funds from Takeda Pharmaceuticals North America, Inc.