Pulitzer Prize-winning 'How I Learned to Drive' opens at Wells-Metz Dec. 3

WHAT: How I Learned to Drive, by Paula Vogel, directed by Mark Kamie
WHEN: Opens Dec. 3 (Friday) at 7:30 p.m. Additional performances Dec. 4 and Dec. 7-11 at 7:30 p.m. with a matinee Dec. 11 (Saturday) at 2 p.m.
WHERE: All performances take place at the Wells-Metz Theatre, Lee Norvelle Theatre and Drama Center at 275 N. Jordan Ave. No photography or recording of any kind is permitted during performances. This production contains mature content.
TICKETS: Regular admission is $22 for adults, $15 for students, $16 for senior citizens; Flex Vouchers offer 4 ticket vouchers at a discount; Student Rush Tickets: $10 with cash and a valid IU Bloomington student ID on the day of each performance.

Bloomington, Ind. -- The Indiana University Department of Theatre and Drama rounds out the first half of its 2010-11 season of award-winning plays with Paula Vogel's How I Learned to Drive, opening Dec. 3 (Friday) at 7:30 p.m. Additional performances are Dec. 4 and Dec. 7-11, all at 7:30 p.m. at the Wells-Metz Theatre. A special matinee will be offered Dec. 11 (Saturday) at 2 p.m. 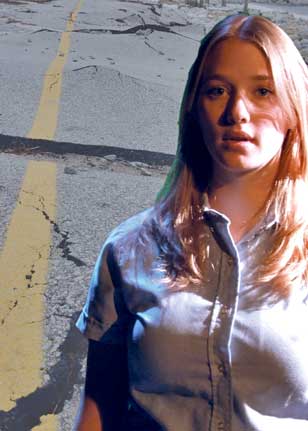 Li'l Bit is played by senior Kerry Ipema in "How I Learned to Drive," opening Dec. 3 at the Wells-Metz Theatre.

Winner of the 1998 Pulitzer Prize for Drama as well as the 1997 Obie and Drama Desk awards for Outstanding Play, this postmodern unconventional coming of age drama takes a critical look at a woman's troubled life in rural Maryland through a series of flashbacks that detail an illicit relationship with her aunt's husband and the effects it has had on her life. Li'l Bit's memories are shaped through the driving lessons that she had from her Uncle Peck. She reflects upon both what he took from her and what he gave her in return -- namely, the freedom and independence of being behind the wheel.

Second year MFA directing candidate Mark Kamie directs the production. Kamie said he recognizes the controversy surrounding the subject matter but suggests that theatergoers reserve judgment about the nature of the story.

"It's not simply a villain and victim play," Kamie said. "It's not a black-and-white situation. There is a lot of moral ambiguity in this complicated world."

Kamie attributes the complexity of the work to Vogel's subtle mastery of character, comparing her to celebrated contemporary playwright Sarah Ruhl. In particular, Kamie said, he admires Vogel's construction of the character of Uncle Peck, here played by senior Kelly Lusk (Take Me Out, Parentheses of Blood). "He's not some mustache-twirling villain that wants to have sex with young girls. She paints a whole picture of a man. [Uncle Peck] falls in love with his niece," he said.

Li'l Bit, played by senior Kerry Ipema (Oklahoma, Dead Man Walking), walks the audience through her harrowing story as if teaching a class on the emotional makeup of the teenage girl. "Sometimes to tell a secret, you first have to teach a lesson," Li'l Bit says at the opening of the play. This lesson should be one of empowerment and self-reflection, Kamie said.

"There's a message about empathy here," he said. "And despite its dark subject matter, the play is humorous."

Li'l Bit is aided in her narration by a Greek chorus of three who play the roles of various family members, classmates and commentators throughout the narrative. Kamie characterizes the chorus members as "spirits" that guide Li'l Bit and the audience through the play.

The roles demand a great deal of flexibility -- the actors must be able to play a wide variety of ages and also sing a three-part harmony with guidance from musical director CJ Palikowski, an IU senior who has appeared in Rent and A Little Night Music. Senior Anna Rose Heyman (Dead Man Walking) plays the Female Greek Chorus. The Male Greek Chorus is played by senior David Coleman (Marat/Sade, Blood Brothers), and senior Rebecca Masur (Marat/Sade, Marisol) plays the Teenage Greek Chorus.

These ghostlike apparitions move in and out of character in a set populated with images of driver's ed films, Americana and the music of the Beach Boys.

For more information about the cast and production team, as well as details on the second half of the 2010-11 season of award-winning plays, visit https://theatre.indiana.edu.