INDIANAPOLIS -- A genomic study of cerebrospinal fluid (CSF) has added a new gene to the list of potential genetic contributors to Alzheimer's disease, a national research team led by Indiana University School of Medicine scientists has reported. 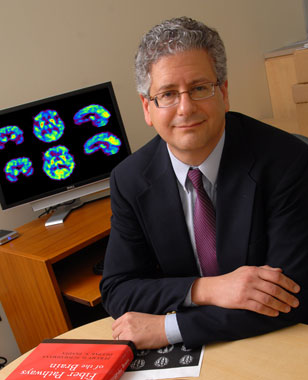 The research team conducted a genome-wide analysis of potential CSF biomarkers that could be used for early detection of Alzheimer's disease, using samples from 374 participants in the national Alzheimer's Disease Neuroimaging Initiative (ADNI).

"This study was one of the first genome-wide analyses of biomarkers in cerebrospinal fluid, which has direct access to the brain and allows you to look at biochemical features that might be more directly tied to the disease," said Andrew J. Saykin, Psy.D., Raymond C. Beeler Professor of Radiology and Imaging Sciences and director of the IU Center for Neuroimaging. The study was reported in the online edition of Neurology, the journal of the American Academy of Neurology.

In the genome-wide association study, researchers looked for genetic variations that could be related to CSF levels of three proteins - beta amyloid, tau and phosphorylated tau - that are linked to damage seen in brains of Alzheimer's patients.

The primary novel finding was that a gene known as enhancer of polycomb homolog 2 (EPC2) was associated with total levels of the tau protein in the cerebrospinal fluid. This gene, which has not previously surfaced in other studies looking for Alzheimer-related markers, has been associated with a gene deletion syndrome that includes mental retardation, short stature and epilepsy.

EPC2 is also involved in the formation of a DNA structure, heterochromatin, that plays a role in the activation and control of gene activity. That process, called epigenetics, refers to the alteration of gene expression by factors beyond the instructions in the DNA itself, including environmental factors.

"The association of CSF tau and the EPC2 gene suggests a possible epigenetic mechanism that warrants follow-up in other samples. These epigenetic processes, in which genome function can be modified through interacting with the internal or external environment, are suspected of playing a role in neurodegenerative diseases such as Alzheimer's," said Dr. Saykin, who leads the Alzheimer's Disease Neuroimaging Initiative genetics component.

The co-first authors of the study were Sungeun Kim, Ph.D., assistant research professor of radiology and imaging sciences, and Shanker Swaminathan, Ph.D. candidate in medical and molecular genetics, at IU School of Medicine, which is located on the campus of Indiana University-Purdue University, Indianapolis. Other investigators from IU include Li Shen, Ph.D., assistant professor of radiology and imaging sciences, Shannon L. Risacher, Ph.D. candidate in medical neuroscience, Kwangsik Nho, Ph.D., post doctoral fellow and Tatiana Foroud, Ph.D., P. Michael Conneally Professor of Medical and Molecular Genetics and director of the Hereditary Genomics Division.

The Alzheimer's Disease Neuroimaging Initiative is funded by the National Institute on Aging (NIA), a component of the National Institutes of Health (NIH), with additional support from pharmaceutical and related industries and not-for-profit organizations including the Alzheimer's Association. The initiative combines clinical, brain imaging (MRI and PET scans) and genetic data with other measurements including CSF and plasma to search for biomarkers that could be used for early diagnosis of Alzheimer's disease and design of more efficient clinical trials.