BLOOMINGTON, Ind. -- Indiana offensive lineman James Brewer and wide receiver Tandon Doss were selected in the fourth round of the 2011 NFLDraft on Saturday. The New York Giants took Brewer with the 117th overall selection and the Baltimore Ravens picked Doss with the 123rd choice.

Doss is the second Hoosier ever selected by the Ravens, and Brewer is the 10th taken by the Giants and the first since 1994. Baltimore took fullback Steve Lee in the 1997 sixth round and New York chose wide receiver Thomas Lewis with the 24th pick in the 1994 first round. 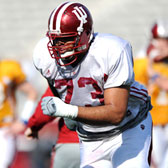