BLOOMINGTON, Ind. -- Record enrollment, research discoveries, and faculty and student accomplishments. The return of a prominent piece of art to its rightful owner in Berlin and the return to prominence of Hoosier basketball. The loss of a visionary leader and the coming together of the entire university community over the tragic disappearance of one of its students. All of these were among the top stories at Indiana University Bloomington in 2011.

The following is a summary, in chronological order, of the "Top IU Bloomington Stories of 2011," compiled by IU Communications. Have another story you think should make the list? Visit IU's Facebook page to share your suggestion or tweet us your ideas. 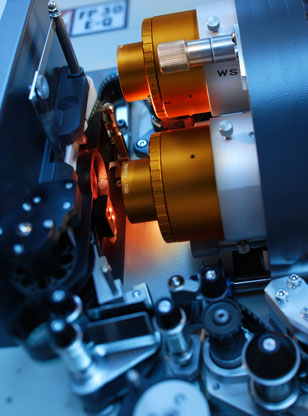 Bogdanovich does Bloomington; IU Cinema officially dedicated. Internationally acclaimed film director Peter Bogdanovich helped mark a historic occasion at IU Bloomington: the formal dedication of the new IU Cinema. The two-time Academy Award nominee joined a host of campus and community officials in heralding the arrival of the new, nearly 260-seat cinema, one of only about 10 THX-certified facilities on college campuses anywhere in the nation. "Our goal is for the IU Cinema to become one of the nation's premier venues for world-class cinema, and we are off to an outstanding start," said IU Cinema Director Jon Vickers.

Audiences lend their ears to world premiere of "Vincent." While exploring Amsterdam's Vincent van Gogh Museum on its opening day, in 1973, a young composer was inspired to dream that he would one day write an opera about the Dutch-born painter who forever changed the world of art. Nearly 40 years later, Pulitzer Prize-winning composer Bernard Rands' lifelong ambition was fulfilled with the world premiere of "Vincent" at IU Opera Theater.

Wall Street's American Idol. On the same day that a 17-year-old from North Carolina won "American Idol," an undergraduate student at the IU Kelley School of Business won Wall Street's version, a major competition for aspiring stock traders. On May 25, Sunjay Gorawara, a 21-year-old senior from Buffalo Grove, Ill., majoring in finance, economic consulting and public policy, came in first place at the new competition, which is part of the prestigious Ira Sohn Investment Conference in New York. His choice of online university Bridgeport Education Inc. (BPI) as the best investment idea at the Sohn conference resulted in the best one-day rise in the company's stock in more than six months. He won the contest over hundreds of other submissions from across the country, including those from veteran investment professionals. The other three finalists were all investment professionals.

IU community comes together to search for missing student. The tragic disappearance of IU Bloomington student Lauren Spierer on June 3 brought together IU administrators, faculty, staff, students, alumni and community members, all of whom remain part of the continuing effort to find Lauren. Her disappearance continues to touch the lives of many people in and around Bloomington and nationwide, who remain hopeful she will be found and reunited with her family. Information about Lauren's disappearance and search is available at the Protect IU website: protect.iu.edu/lauren.

Sex, as we know it, works thanks to parasites. It seems we may have parasites to thank for the existence of sex as we know it. IU biologists found that, although sexual reproduction between two individuals is costly from an evolutionary perspective, it is favored over self-fertilization in the presence of coevolving parasites. A July report in Science, "Running with the Red Queen: Host-Parasite Coevolution Selects for Biparental Sex," affirmed the Red Queen hypothesis, an evolutionary theory who's name comes from Lewis Carroll's "Alice in Wonderland" text: "It takes all the running you can do, to keep in the same place."

Loss of a visionary leader. The IU community mourned the passing of President Emeritus John Ryan in August. For more than a half century, Ryan played a pivotal role in the growth and development of IU, and he remained a great friend of IU after retiring as president in 1987. His 16 years as president saw the establishment of regional campuses in Richmond and New Albany, and the creation of a number of new schools and cultural centers on the IU Bloomington campus.

'Obesity is contagious' study is flawed. IU Bloomington mathematics professor Russell Lyons' published critique of a highly publicized study on obesity being socially contagious garnered international attention. His research, "The Spread of Evidence-Poor Medicine via Flawed Social-Network Analysis," published in the journal "Statistics, Politics, and Policy," questioned the conclusions made by Nicholas Christakis of Harvard and James Fowler of the University of California, San Diego, in their highly publicized 2007 paper "The Spread of Obesity in a Large Social Network over 32 Years" that appeared in the New England Journal of Medicine.

9/11 Commission members reconvene. A decade after the Sept. 11, 2001, attacks, members of the National Commission on Terrorist Attacks Upon the United States, also known as the 9/11 Commission, gathered at IU Bloomington for a public discussion of subsequent history and lessons learned. The event, "Ten Years Later: The 9/11 Commissioners Reflect," took place in September at IU Auditorium and included eight of 10 commissioners who came to campus at the invitation of former U.S. representative and current IU Center on Congress Director Lee H. Hamilton.

Enrollment reaches historic high. IU enrollment reached an all-time record high last fall, topping 110,000 for the first time at the university's eight campuses across the state, including a record 42,731 at IU Bloomington. The Bloomington campus also welcomed the second-largest freshman class in the university's history -- 7,400 freshmen who, collectively, represented the most academically decorated class ever, including more than 128 Indiana high school valedictorians.

Looking for the BEST. In September, it was announced that a group of investors had created a $1.1 million fund to support $250,000 in annual prize money to IU Bloomington students who submit the best business plans for a student-led company focused on Internet and software technology. The annual prizes for BEST -- Building Entrepreneurs in Software and Technology -- will be the largest in the world offered by a university solely to its students in a business plan competition.

Goodbye Provost Hanson, Hello Interim Provost Robel. In October, Karen Hanson, IU Bloomington provost since 2007, was named senior vice president and provost of the University of Minnesota, her alma mater. IU President Michael A. McRobbie congratulated Hanson on her new appointment and for the many contributions she made over her 35-year career at IU as an educator, scholar and administrator. Hanson will leave the university Jan. 31. Lauren Robel, dean of the IU Maurer School of Law since 2003 and a faculty member at IU Bloomington since 1985, will assume the role of interim provost upon Hanson's departure.

An exterior view of the new Cyberinfrastructure Building in IU's Technology Park East at 10th Street and the Indiana State Road 45/46 Bypass in Bloomington.

Introducing the CIB -- IU's new tech headquarters. IU President Michael A. McRobbie and a dais filled with university trustees, IU administrators, public officials and dignitaries dedicated the university's new $37 million Cyberinfrastructure Building on Oct. 12 in a ceremony that recognized a 15-year journey to make IU a leader in the uses and applications of information technology. The 123,000-square-foot building is the latest building to be completed at the growing IU Technology Park East at 10th Street and the Indiana State Road 45/46 Bypass.

Summer tuition relief. In October, IU Trustees approved a plan to significantly reduce undergraduate tuition for summer session students. Beginning next summer, Indiana resident undergraduates enrolled at IU Bloomington and IU's other campuses will receive a 25 percent discount in tuition for courses taken in the summer. Nonresident undergraduate students will receive an equivalent dollar reduction in their tuition. Indiana Gov. Mitch Daniels, Indiana Commissioner for Higher Education Teresa Lubbers and other officials were supportive of the new plan, which is intended to provide tuition relief to students, while helping them graduate on time.

Notre Dame can't claim all the Irish. IU alumnus Michael D. Higgins was elected in October as the ninth president of Ireland, culminating a long career as a politician, author and human rights activist. A native of Limerick, Higgins received a master of arts degree in sociology at IU Bloomington in 1967.

A truly world-class university. Indiana University Bloomington has never been more international, according to the latest "Open Doors" report released in November by the Institute for International Education. Among more than 1,200 U.S. universities, IU Bloomington now ranks eighth, up from 11th in last year's report, in overall number of students studying abroad and ranks 11th, up from 14th, in the number of international students enrolled. The advance represents the best collective showing in the history of the IU Bloomington campus. "These latest rankings confirm Indiana University's standing as a truly world-class institution of higher education," said IU President Michael A. McRobbie.

The "Flagellation of Christ" painting

Painting returns home. More than 60 years after it disappeared from a Berlin museum in the chaotic aftermath of World War II, a painting depicting the flagellation of Christ returned home. IU President Michael A. McRobbie and IU Art Museum Director Heidi Gealt were among an IU contingent that returned the late 15th-century painting, the "Flagellation of Christ," to the Jagdschloss Grunewald in a ceremony Nov. 21 at Charlottenburg Palace in Germany. It was one of more than a dozen paintings that disappeared from the Berlin museum during the summer of 1945, looted by Russian and British soldiers. The IU Art Museum acquired the painting in 1985 as a gift from former IU President Herman B Wells. IU officials said Wells purchased the work in good faith from a London art gallery in 1967. Watch a video about the painting's return.

Record number of AAAS Fellows. A record 10 IU Bloomington faculty members were awarded the distinction of Fellow by the American Association for the Advancement of Science. Founded in 1848, AAAS is the world's largest general scientific society. The new Fellows include seven from the College of Arts and Sciences and one each from the School of Education, the School of Library and Information Science, and the School of Medicine. The 10 new Fellows represent the largest group selected from IU since 2001, when five Fellows were named, and brings the total number of AAAS Fellows at IU to 66.

The Hoosiers are back! Don Fischer's call says it all.