EDITORS: The 2012 presidential debates between Barack Obama and Mitt Romney begin Wednesday, Oct. 3, with a debate on domestic policy at the University of Denver. Additional debates will be Oct. 16 and 22. For a complete and ongoing look at expert sources, election-related news releases and IU media resources, visit IU's Decision 2012 media guide for complete election resources at IU. Indiana University faculty members are available to comment. They offer these most recent observations:

Caitlin Dwyer and Kristina Sheeler, faculty members in the IU School of Liberal Arts at Indiana University-Purdue University Indianapolis, note that the Romney and Obama campaigns are both playing down expectations for the debates. Their goal in the debates isn't so much to "win" the debates but to do better than anticipated and appear presidential.

Obama's campaign insists he hasn't had time to prepare because he's busy being president, said Dwyer, an assistant professor in the Department of Political Science. Romney's campaign has called Obama a "gifted speaker," and Romney has declined to predict victory in the debates.

"Normally we see the campaigns bashing each other," Dwyer said. "But when it comes to the debates, we see a complete flip, and each candidate is saying the other is a much better debater."

"Managing expectations is not new, but it is an important pre-debate strategy," said Sheeler, chair and associate professor in the Department of Communication Studies. "If the Romney campaign can lower expectations, then even a marginal performance will be perceived as a major debate victory."

Sheeler says the debates are Romney's "last chance to convince the voters that he is the preferable candidate and able to connect with middle-class voters," with just five weeks remaining until Election Day and major polls showing the race even or Obama ahead. "This may be easier said than done given that the incumbent president is widely thought of as a gifted orator," she said.

Dwyer notes that independent voters in a handful of battleground states will be the target audience for both candidates. TV networks will gauge the reaction of Republican, Democratic and independent voters to the debates in real time, and "people should be watching that independent line move up and down to see how they react to the candidates' statements," she said. Furthermore, the Oct. 16 debate will feature a town-hall format in which questions are asked by undecided voters selected by the Gallup organization.

"I think that debate will be particularly interesting and will shed some light on how independent voters view the candidates and issues and how the candidates frame their responses to appeal to those voters who still have to make up their minds before November," Dwyer said.

Advice for the candidates

The debates may offer a unique and enticing platform for voters who are overwhelmed by campaign ads or pundit-driven inflammatory discourse, says Brian DeLong, lecturer in the School of Public and Environmental Affairs and the IU Bloomington debate coach. As such, he offers the following advice to the candidates:

Debates an opportunity for Romney

Debates do matter, says Marjorie Hershey, professor of political science at IU Bloomington. Along with political conventions, they are among the few campaign events that grab the attention of most voters. And among the relatively small proportion of undecided voters -- who will control the outcome of the election -- many are undecided only because they haven't yet given the contest a lot of thought.

"While we tend to look at the debates as theater, they are among the few occasions that many people pay attention to the presidential campaign," Hershey said.

She added that the debates could revive Romney's prospects after a rough few weeks for his campaign, including videotaped remarks at a private fund-raiser, accusations that he tried to politicize the killing of the U.S. ambassador to Libya and criticism by some Republican strategists.

"It won't be hard for Gov. Romney to do better than expected," Hershey said.

Hershey can be reached at hershey@indiana.edu. For assistance, contact Steve Hinnefeld at 812-856-3488 or slhinnef@iu.edu. Top

Simple goals for each candidate

The debates mark the first time the American public will view Obama and Romney side by side and try to make a determination as to which is best suited to lead the U.S. going forward, says Marie Eisenstein, associate professor of political science at IU Northwest.

"I think that for each candidate, there is one simple goal," she said. "President Obama needs to show that Gov. Romney is not qualified or prepared to be president. That is, Obama needs to demonstrate that Romney lacks the ability to be presidential or to make tough decisions as president. Conversely, Gov. Romney needs to hit Obama hard on his failed economic and foreign policies, which is not critically evaluated in the mainstream media."

Eisenstein said Romney needs to highlight "why voters should -- at a minimum -- vote against Obama," but he can help his cause by also persuasively arguing how he would manage our current economic and foreign policy crises.

The most important thing to keep in mind about the upcoming presidential and vice presidential debates is that they are not really debates, says Leslie Lenkowsky, clinical professor in the IU School of Public and Environmental Affairs. These quadrennial events are more like carefully staged -- and rehearsed -- press conferences. The amount of new information the debates provide voters is usually small.

"That may be why, in the five decades in which they have been held, hardly any of the debates has had much impact on the outcome of our national elections," Lenkowsky said. "The first one, featuring John F. Kennedy and Richard M. Nixon, was thought at the time to have shifted momentum toward the Massachusetts senator, partly because his Republican opponent looked tired and drained under the glare of the television lights. But studies have subsequently cast doubt on that.

"Since then, memorable moments have been scarce and ones that changed the course of an election virtually unknown. According to most observers, Ronald Reagan is the only candidate who turned potential defeat into victory as a result of a strong debate performance just one week before the election. But of course, Reagan had far more experience in front of a camera than the typical office-seeker."

For the Romney-Ryan ticket, this history is not good news, Lenkowsky added. With polls showing the Republicans trailing, both nationally and in key battleground states, the likelihood that they will be able to use the debates to overcome the gap is small.

"They will probably try to respond to the questions that have arisen about how a Romney administration might govern, hoping to remain competitive and set the stage for a frenetic last two weeks of campaigning," he said. "However, the debate format is not conducive to detailing policy positions.

"For the Obama administration, the goal will be to avoid making a potentially disastrous blunder. Despite high levels of public disapproval and concern about the country's future, President Obama and Vice President Biden have managed to get themselves in position to be re-elected, but their margin for error is not large. As they have been doing all year, they will try to follow the old adage that the best defense is a good offense and go after their Republican opponents. But the questioners may not allow them to do so and force them to defend their record of the past four years."

Lenkowsky's main research focus is on nonprofits and public policy, civil society in comparative perspective, volunteering and civic engagement, and social entrepreneurship. He developed and teaches a course on communications in public affairs. Contact him at 812-855-4072 or llenkows@indiana.edu. Top

The Truthy team from Indiana University Bloomington has unveiled a timely interactive visualization tool focused on Twitter activity related specifically to the upcoming presidential election. Designed to benefit not only researchers, but also journalists and voters, the election coverage section at Truthy allows visitors to chart tweet volume related to presidential candidates and political topics, annotating the highs and lows in the timelines with content from popular links shared on Twitter. 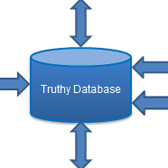 The site also monitors Twitter political activity to build interactive networks that allow visitors to identify the most influential users talking about those topics, be they left-leaners, right-wingers, or of an unknown political bent, and then links guests to those influential Twitter feeds and other information about their online activity, such as sentiment, language, and political leaning.

The Truthy election analytics tool lets the public see what content most affects Twitter traffic, who are the top retweeted or mentioned users, and how political information spreads through the social network. The tool is part of the Truthy site, developed by researchers and doctoral students at the School of Informatics and Computing's Center for Complex Networks and Systems Research. Other tools include maps to analyze the geo-temporal diffusion of memes, and the generation of YouTube movies that display how hashtags emerge and connect. The project aims to study the factors affecting the spread of information — and misinformation — in social media. Themes such as news, social movements, and elections provide ideal domains to explore these questions.

To speak with members of the Truthy "Elections" research team, contact Steve Chaplin, IU Communications, at 812-856-1896 or stjchap@iu.edu. Top