EDITORS: This monthly tip sheet is based on Indiana University faculty research, teaching and service. "Living Well Through Healthy Lifestyles" is the guiding philosophy of IU Bloomington's School of Health, Physical Education and Recreation. In keeping with that philosophy, this tipsheet offers information related to both physical and mental well-being. Faculty in other IU schools and departments also contribute their expertise in this area.

September's tips discuss balance exercises that can be performed at home, a family television viewing strategy and the benefits of cooking your own food. 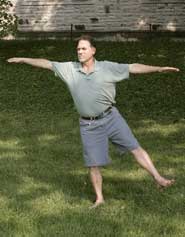 Pictured is one of three basic balance poses practiced at home by study participants.

Balance practice isn't child's play. Balance has less to do with strength and everything to do with an elderly person's ability to get around and live independently. Yet, few people in their later years think to practice balancing -- until it's too late. A fall that involves broken bones, aside from potentially leading to death, often results in a dramatic decline in mobility, health, independence and quality of life, even after the breaks heal. Practicing three balance postures for just 15 minutes a day, four days a week, improved the balance of 55- to 60-year-old participants in an Indiana University Bloomington study that looked at whether a home-based balance program could improve balance. The IUB researchers were intrigued by the prospect of a home-based balance training program, as opposed to physical therapy, which often involves costs and travel. The poses (Watch: forward knee lift, https://newsinfo.iu.edu/pub/libs/images/usr/positionA.ram; side leg lift, https://newsinfo.iu.edu/pub/libs/images/usr/positionB.ram; stork stance, https://newsinfo.iu.edu/pub/libs/images/usr/positionC.ram) can be practiced alone or incorporated into an existing physical fitness regimen. Before trying these at home, a person should consider the following:

Click here, https://newsinfo.iu.edu/news/page/normal/2418.html , for detailed directions for the three poses.

Before and after the six-week balance regimen, researchers carefully measured the participants balancing abilities, including sway patterns, and found that the speed at which the participants swayed actually increased by the end of the six-week study -- and this is a good thing. Doctoral student Koichi Kitano said the increased velocity of the participants' sway patterns increased their stability. David Koceja, a professor in IU Bloomington's Department of Kinesiology, said sway patterns change as people age. For senior citizens, their sway patterns are likely to be more circular. Koceja said he expected the balance poses in the study to reduce the amount of the troublesome side to side sway in study participants. Instead, the participants saw an average increase, or improvement, in their sway speed of 16 percent. "We took the balance system and instead of being more sluggish, it became more flexible and adaptive," Koceja said.

One way to "interrupt" the connection between children and television is to bring a family focus back into the equation. Watching TV together can promote healthier television consumption for children, said Maresa Murray, an assistant professor in the Human Development/Family Studies program in Indiana University Bloomington's Department of Applied Health Science. She noted that in 2003, Nielson Media Research estimated that U.S. family households watched an average of eight hours of television per day, while 57 percent of children in the United States between ages 8-16 have a television set in their bedroom (Media in the Home 2000, Annenberg Public Policy Center). Current research from Indiana University and the American Medical Association has shown relationships between TV viewing and both adolescent obesity and lower standardized test scores.

Fighting weight gain? Reach for your pots and pans. "When people rely on highly processed, ready-to-eat foods, they give up control of what they are eating," said Victoria Getty, director of the Didactic Program in Dietetics at Indiana University Bloomington. "Prepared foods have more sweeteners, sodium and calories than most people would use when cooking from scratch." Getty said that many students arrive at college with few cooking skills aside from how to use a microwave. This puts them at a disadvantage in terms of their weight and their health. "The first time I taught a class involving food preparation, I set the students up at separate stovetop stations and asked them to melt a pat of margarine. All of a sudden there was a giant line in one end of the room. I had to go over and ask what was happening before I realized they were all in line for the microwave." Getty said that once students learned how easy it was to melt margarine in a pan on the stove, they became more confident and more interested in simple cooking techniques. "It's easy to learn a few basic skills in the kitchen," she said. "Once you know how to prepare fresh foods, you have many more choices available to design a healthful diet that is under your control."

Look for cooking classes through your local community center or continuing education program. Or, said Getty, pick up a book or DVD from the library or bookstore like the ones listed below:

The Didactic Program in Dietetics is in the Department of Applied Health Science in IUB's School of Health, Physical Education and Recreation. Getty can be contacted at 812-855-3936 and vgetty@indiana.edu.