BLOOMINGTON, Ind. -- A new football coach, another Rhodes Scholar, an exhibit on an enormous extinct snake, new research about breaking up online, the most successful fundraising campaign ever, and numerous student and faculty accomplishments were among the top Indiana University Bloomington stories in 2010. The following is a summary of the "Top IU Stories of 2010" complied by the Office of University Communications staff.

Kiplinger's ranks IU as a 'best value,' particularly for Indiana residents. Indiana University moved into the top 30 for the first time in Kiplinger's Personal Finance magazine's rankings of the "100 Best Values in Public Colleges." IU, which ranked 28th overall, was third among Big Ten universities.

IU's Lilly Library to celebrate 50th anniversary with collection of rare treasures. An exhibition of rare books and manuscripts to mark the 50th anniversary of Indiana University's Lilly Library included treasures never before displayed together. An open house to view the exhibition and the library's newly renovated reading room was scheduled for Jan. 22, 2010. "Treasures of the Lilly Library" featured such rare items as William Shakespeare's First Folio, George Washington's letter accepting the presidency, Albrecht Dürer's Apocalypse, and the first edition of Geoffrey Chaucer's Canterbury Tales, printed in the 1470s.

IU Bloomington libraries named top in the country. The Indiana University Bloomington Libraries were recognized by peers as the top university library in the country, a national library association announced Tuesday, Jan. 26, 2010.

Putting the 'MC' in McRobbie: IU president to host rock radio show on WFIU. Indiana University President Michael McRobbie guest hosted the WFIU radio program "Just You and Me with Joe Bourne" March 5, 2010 from 3:30-5 p.m. The president played his favorite rock songs from his days as a college student.

IU trustees approve design of new music studio building, science and engineering lab. In February the IU Board of Trustees approved the design of a new Studio Building for the Jacobs School. The 85,000-square-foot structure, to be constructed on the northeast corner of Third Street and Jordan Avenue, is expected to provide technologically and acoustically superior teaching and practice facilities that will rival those of any music school or conservatory in the world.

Historic $15 million gift continues Cook's longtime commitment to higher ed. Indiana University President Michael McRobbie and Vice President and Director of Intercollegiate Athletics Fred Glass announced the single largest gift in the history of the department of athletics. The Cook Group made a $15 million gift to the For the Glory of Old IU capital campaign, which was utilized to support and enhance the new basketball development center for the benefit of student athletes in the men's and women's basketball programs. In recognition of this historic gift, Indiana University named the new basketball development center "Cook Hall."

Jacobs commissions new opera on life of Vincent Van Gogh. Written by Pulitzer Prize-winning composer Bernard Rands and one of the most sought-after librettists, J. D. McClatchy, the Jacobs-commissioned opera Vincent will be given its world premiere in April 2011 at the MAC in honor of the school's 100th anniversary as a department.

Federal appeals judge relocates chambers to IU Maurer School of Law. The Honorable David F. Hamilton, judge of the United States Court of Appeals for the Seventh Circuit, announced plans to relocate his chambers to the Indiana University Maurer School of Law in Bloomington. This arrangement, one of only a few of its kind in the United States, will give students at the law school first-hand exposure to the workings of the judicial system.

IU professor's new book, "The Breakup 2.0," looks at how people use new media to end relationships. According to this story, Leslie checked her Facebook profile late one day and discovered that she was suddenly single. Her now ex-boyfriend had met someone new, and she learned this through the ubiquitous news feed that presented her personal rejection like a breaking news story. Their friends received the news before she had. There are now many more ways to break up -- both in public and in private -- and many of them are virtual. Leslie was one of 72 people that Ilana Gershon, an assistant professor in the Department of Communication and Culture at Indiana University Bloomington, interviewed at length for her new book.

IU named a 2010 Best Place to Work in IT. Indiana University was recognized by Computerworld magazine as one of the Best Places to Work in IT. This added a human-centric distinction to IU's long list of honors in information technology (IT), which include numerous awards for advanced networks, software and services.

IU English Professor Scott Russell Sanders wins Indiana Authors Award. Scott Russell Sanders, a Distinguished Professor Emeritus of English at Indiana University, was selected as the national recipient of the 2010 Eugene and Marilyn Glick Indiana Authors Award. This lifetime achievement award recognizes the contributions of Indiana authors to the literary landscape in Indiana and across the nation.

Le Thi Duc stands before the remains of a home in Hanoi that was destroyed the night her family was killed by a U.S. air raid.

Jeffrey Wolin to unveil 'Portraits of American and Vietnamese War Veterans' at festival in France. It was December of 1972 in Vietnam. U.S. Air Force Col. Thomas Sherman was airborne commander of "Operation Linebacker II," 11 days of bombing targets that he said included railroads and military installations. Vietnamese civilian Le Thi Duc will never forget the horrors she experienced in December of '72, when she was just 18. When the air raid sirens went off, she and her older brother, along with their sister and brother-in-law, huddled in a straw-covered dirt hole in front of her family's home. Told from vastly different vantage points, the images and stories of Thomas Sherman and Le Thi Duc were displayed side-by-side in a new solo exhibition by Indiana University photography Professor Jeffrey Wolin.

Retired reporter Marty Anderson gives IU School of Journalism its largest gift ever, $1.75 million. Indiana University alumnus Marty Anderson, whose career as a reporter and editor at the Associated Press (AP) spanned more than three decades, gave the IU School of Journalism its largest individual gift ever, totaling about $1.75 million.

IU Bloomington has lowest net cost among all Big Ten universities. Families researching higher education opportunities for their college-bound children probably have never encountered the term "average net price." It is the average amount that in-state undergraduates actually pay -- after financial aid -- for tuition, room, board and living expenses at a college. But that may change soon, now that the U.S. Department of Education is trying to make this information readily available by calculating and publishing average net prices for every college and university in the country on its new College Navigator website.

IU concludes most successful fundraising campaign in university's history. Indiana University President Michael A. McRobbie announced on Oct. 8 the conclusion of the Matching the Promise campaign for IU Bloomington, which raised $1.144 billion, exceeding its initial goal of $1 billion and making it the most successful campaign in IU history. "This is an historic day for Indiana University," McRobbie said. "By far surpassing our initial goal for this campaign -- and accomplishing this extraordinary feat in the midst of an economic recession -- we are making an IU education affordable and accessible to deserving students."

This artist's rendering of Titanoboa cerrejonensis demonstrates the great snake's size. It is anticipated the boa spent much of its life in or near water.

Enormous extinct snake is the star of a new IU Bloomington geology exhibit. Earth's largest snake on record was on display as part of a special exhibit at Indiana University Bloomington's Geology Building. Well, the entire snake wasn't present, but rather a cast of the original 60-million-year-old, foot-wide vertebra from Titanoboa cerrejonensis. The boa constrictor is believed to have measured 43 feet from snout to tail tip and to have weighed 2,500 pounds.

Grand opening of IU Cinema scheduled for January 2011. The highly anticipated Indiana University Cinema will open in late January 2011 rather than this fall as initially planned because installation of its state-of-the-art digital projection system will take longer than expected, said IU Cinema Director Jon Vickers. When completed, the facility will be one of only about 10 THX-certified facilities on college campuses anywhere in the United States.

New study highlights sexual behavior and condom use in the U.S. among individuals ages 14 to 94. Findings from the largest nationally representative study of sexual and sexual-health behaviors ever fielded, conducted by Indiana University sexual health researchers, provided an updated and much needed snapshot of contemporary Americans' sexual behaviors, including a description of more than 40 combinations of sexual acts that people perform during sexual events, patterns of condom use by adolescents and adults, and the percentage of Americans participating in same-sex encounters.

Analyzing almost 10 million tweets, research finds public mood can predict Dow days in advance. Measurements of the collective public mood derived from millions of tweets can predict the rise and fall of the Dow Jones Industrial Average up to a week in advance with an accuracy approaching 90 percent, Indiana University information scientists have found. 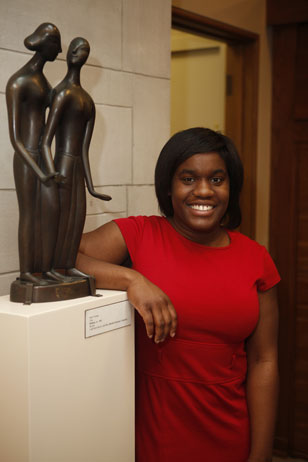 IU student Esther Uduehi named Rhodes Scholar. Esther Uduehi, a senior at Indiana University Bloomington majoring in chemistry and mathematics, was named a Rhodes Scholar for 2011. She is one of 32 Americans selected for the prestigious academic award. Uduehi, of Evansville, Ind., becomes the 16th IU student -- and second in as many years -- to receive a Rhodes Scholarship, which provides all expenses for two or three years of study at the University of Oxford In England.

Hoosiers put in OT to win Old Oaken Bucket. Ben Chappell had a record-breaking day for Indiana, and Mitch Ewald booted two short field goals late, giving Indiana a 34-31 overtime victory at Purdue to win back the Old Oaken Bucket. The Hoosiers (5-7, 1-7 Big Ten) won for the first time since 1996 in West Lafayette.